During my first haircut on Canadian soil, my barber mentioned to me that shows in Vancouver are for the most part, tame. Punters like to stand in front of bands, arms crossed, the occassional headnod. I couldn’t tell if he was talking about neo-gentrified snobbery or if Vancouver shows just attracted a bunch of losers. Either way, I was determined to shake things up a little when I bought tickets for myself and I to see Municipal Waste headline the Modified Ghost festival, at Vancouver’s notorious dive metal venue, The Rickshaw Theatre.

I went early to catch local band Sore Points, whose impressive demo I’d heard the day before. Their set was lively but I found the tempo to be the same in every song. When you don’t know a band well enough to know the words, all you hear is the overview – when that’s the same on every track, you’re not as stimulated as you could be. I also watched four bands prior to the headline, seated. I’ve never sat at a gig before, never been an option. The Rickshaw is a weird venue; intimate up front but rows of theatre seats line the back; all too inviting for a semi-timid, solo first-timer, like myself.

The barber was right; a sparse crowd and no one moshing. Dissapointment arose. What would it be like for Municipal Waste? Stationary bodies, planted like flagpoles? I fucking hope not. Otherwise my pit-starter reputation would offend. The last time I saw this band I was in a sling with a torn shoulder, one of the most terrifying experiences of my life. Attending a thrash gig and trying not to collide with anyone is impossible. Yet in Vancouver, the number of Rickshaw passengers committing LCD-mutiny on their phones was astounding. Is this how Vancouverites go to shows? Tilted chins and handheld insecurities? It wasn’t looking good.

Until the lights dimmed and four silhouettes glided over the darkened platform. Chairs began to empty and a rush of semi-pissed, semi-stoned soldiers marched their way to the front. The time had come.

I’m proud to say that Municipal Waste shattered the barber’s chat in an instant. First track; circle pit. Second track; even bigger circle pit. Third track? Headbanger. Facerip.
The entire crowd opened up like a porthole of misled youths revolving rapidly.
Sadistic Magician blasted through the speakers and into my plums. Next thing, I was in there, spinning the fuck out of my mind and spine, ribs smashing, head banging.
Nothing but smiles and beer-soaked down pours for all.

Lead singer Tony Foresta announced half way through that on his flight over to Canada, he caught a bug and lost his voice. Could have fooled me. He rejoiced that five tracks into their set, something ripped in his throat – his voice had returned! He offered to replay the first five songs. I wasn’t complaining. Everything kicked up a gear and then he made his request to ‘Surf the shit out of this place’ to their new track ‘Wave of Death’.
I’ve never seen anything like it. The least amount of crowd with the most amount of crowd surfers. Fuckin’ magic. I threw countless people above my head, swallowing soggy shoelaces and sweaty kneecap sandwiches.

Closing out with their classic ‘Born to Party’, the anthem chants of ‘MUNICIPAL WASTE IS GONNA FUCK YOU UP!’ left a sense of peace in me. Once again, I knew that thrash metal had delivered, destroying insecurites, trendiness and all round snobbery in its potent wake.

Rickshaw pit-merchants, we salute you. 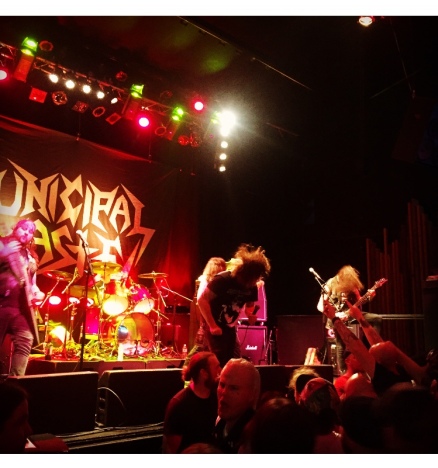